Dealing With Covid-19 & Uncertainties In the Asphalt Industry 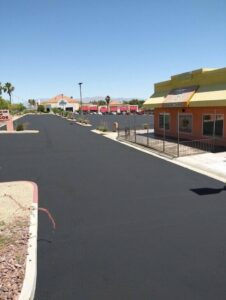 New Year’s Eve in Las Vegas is always something special. The Strip, which is closed to traffic for the celebration, turns into what is essentially a block party of epic proportions. Partygoers can take in the hottest shows and events, and big-name celebrities can be spotted on stage as well as among the crowds. As usual, Vegas was packed with visitors from all over the United States and scores of other countries on Dec. 31, 2019. At the time, few people had any clue that 2020 was going to be an extremely trying time for virtually every nation on the planet.

Less than a month into the new year, we began to hear about a new type of coronavirus that was already running rampant in China. It was described as highly contagious, and there was no vaccine for it. We learned that the elderly and people with existing health conditions were at the greatest risk of severe complications that were frequently fatal. This information was not particularly shocking; these groups are typically the most at-risk during every flu season. Initially, many Americans just shrugged and carried on with their lives. After all, coronavirus was just another flu, right? Besides, China was half a world away.

By January 31, there were seven confirmed cases of COVID-19 in the United States. A public health emergency was declared, and the first travel ban was announced. By February 29, there were 69 cases. It became patently obvious that COVID-19 was a killer that was spreading like wildfire around the entire world.

For years, Las Vegas has hosted more than 42 million visitors annually. Everyone knew that we would not escape the pandemic forever. However, there were so many things that we did not know. How was it spread? How far would it spread? How long until there would be a vaccine? Was an effective vaccine even possible? Was it safe to travel between states or even between cities? As parents, how could we protect our children? As business owners, how could we protect our employees, our customers, and our community?

The first case of COVID-19 in Nevada was reported on March 5, and a state of emergency was declared by the governor a week later. There were voluntary closures by some resorts on the Strip, and the governor ordered schools throughout the state closed. Hospitals began postponing elective surgeries, and jury trials were postponed. On March 17, the governor ordered the closure of all non-essential businesses. For the first time since John F. Kennedy’s funeral in 1963, the casinos on the Strip were closed. Gatherings were limited to a maximum of 10 people, and restaurants could only offer takeout, delivery, and drive-thru service. For a city that relies heavily on tourism to fuel its economy, these closures were frightening. No one could be certain how long the closures would last.

The closures did not apply to construction sites. However, the health of workers had to be checked every day, employees had to practice social distancing on the job, and a maximum of 10 people could attend a meeting. Normally, March is when we begin increasing our staffing at Affordable Striping & Sealing so that we are prepared for our busy season. With so many unanswered questions, we were not comfortable following our normal process. We have many long-term employees, and we wanted to give them whatever work might be available. It also seemed unfair to hire new employees that we might be forced to let go long before the end of the season. People matter a great deal to us, and our employees and those we might have hired have financial commitments, families, or goals. We had to make some tough decisions, but we put ourselves in their shoes to try to make the calls that would be in their best interests.

We knew that our customers also had many unanswered questions. How long can the company survive without any revenue? How can the company help its employees? When will the company be allowed to reopen? Will it ever reopen?

We continued to schedule jobs and to work the jobs that had been scheduled before the world had ever heard of COVID-19. Some customers called to postpone or cancel jobs that they had scheduled months earlier. We understood their concerns. After all, our plan was to run short-staffed until we had enough information to make an informed decision.

You probably know the old saying about plans going astray. We had to send one entire crew into quarantine. As a result, our schedule was totally disrupted, and some jobs had to be delayed or canceled. We immediately contacted our customers to let them know what was happening. We were completely transparent about the reasons for the scheduling issues.

We are aware that some companies would have tried to circumvent a quarantine, and a few might have succeeded. That is not who we are. We believe in honesty, open communications, and the value of people. We would never risk the health of our employees, our customers, their families, and our community.

Every one of us still face many uncertainties that may not be resolved anytime soon. We do not know what the future holds for our company, our state, or our world. What we do know is that Las Vegas is a great city that is filled with amazing people. If we all work together, we will get through this.