What Are The Meanings & Types of Pavement Markings? 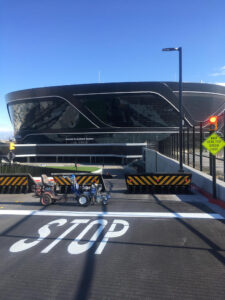 In 1900, there were fewer than 4,200 cars in America, but that number increased to approximately 500,000 by 1910. Accidents were plentiful throughout the first decade of the 20th century, and the lack of road markings played a part in many crashes. Between 1910 and 1920, many states began requiring specific pavement markings. It is a good thing that they did; in 1919, 6.7 million cars were cruising American roadways, and in 1929, 27 million automobiles were sharing the nation’s streets and highways. Today, more than 275 million vehicles registered in the United States, and pavement markings help make the nation’s interstates, city streets, rural highways, and even parking lots safer.

What Materials Are Used for Marking Pavements?

Traditionally, various formulas of paint have been used for roadway, and parking lot restripe and marking projects. Yellow and white are the colors that are used the most, but you may also encounter pavement markings that use blue or red paint. In recent years, thermoplastic striping has grown in popularity. Thermoplastic markings are not as inexpensive as paint, but thermoplastic stripes and markings typically last three to five times longer than their painted cousins.

What Are Some Common Styles of Pavement Markings?

Whether you are traveling on a freeway, a busy urban boulevard, or a remote highway, you will likely encounter solid lines, broken lines, and arrows. You may also encounter other shapes, but lines and arrows are the most common styles.

What Do the Different Styles of Pavement Markings Mean?

Whether used on a public street or as part of the parking lot design, arrows are directional tools. They may point straight ahead, bend to the left, or bend to the right, and you are expected to follow the direction indicated. Interpreting the meaning of solid and broken lines is a little more complicated.

• On an undivided roadway, a broken yellow line down the center of the pavement indicates that you are on a pavement with two-way traffic, so you are to keep your vehicle on the right side of the line unless you are passing. A solid yellow line in your lane means that passing is illegal; if there is a broken yellow line in the lane for oncoming traffic, those drivers are not prohibited from passing. If there are two solid yellow lines, no one is legally allowed to pass.
• On a one-way street or divided roadway, an unbroken yellow line appearing on the left of your lane tells you that you are on a one-way street or highlights the edge of the dividing median.
• Broken white lines on a road that provides more than one lane for traffic moving in the same direction indicate the boundaries of each lane.
• A solid white line parallel to your direction of travel means that changing lanes is discouraged, but two solid white lines mean that changing lanes is prohibited.
• A solid white line across your path of travel shows you where to stop your vehicle before entering an intersection or crosswalk. They may also be used to show you where to stop your vehicle at a railroad crossing when the signals indicate that a train is coming. Stop lines can be found in parking lots as well as on roadways.

When you need superior parking lot maintenance, you can rely on Affordable Striping & Sealing. We are an experienced, well-respected company known for exceptional results and exemplary service. Our services include asphalt sealing, parking lot design, asphalt crack repairs, road markings, parking lot bumper blocks and signs, and parking lot striping. We serve commercial clients throughout the Las Vegas Valley. To contact us for a free quote, call 702-222-9009, or, if it is more convenient for you, submit our online form.